How To Make A Sequence Collage

You've probably seen this kind of collage in various magazines and you may be wondering how its done. I've been making these kind of sequence collages for some time now, particularly for wakeboarding, because you can see how a trick is executed quite clearly. If you would like to see my full collection, you can check it out at http://www.davidngiam.com/sequences

So anyway, to start with, you need a camera that is capable of shooting at a high frame rate (ie. its able to shoot multiple images continuously and very quickly). For example, the above sequence was shot with a Canon 7D at 8 frames-per-second (fps). For wakeboarding, I think at the minimum, you should get something that can shoot at 5fps or higher. If its too slow, then it may not look as nice as the gaps between the rider in each frame will be too far apart. On the other hand, if its too fast, then your subject may overlap too much.

If you don't have a camera that shoots fast enough (because this feature is usually found in mid-range DSLRs or better), you can also grab the screenshots from a video as well. Video shoots typically at 30fps, so instead of using every frame, pause the video and grab a screenshot (some video players like VLC from videolan.org allows you to grab from within the program). You don't need to grab every single frame, instead skip 3 or 4 frames and grab another screenshot. The trade off from grabbing screenshots from videos is that your resolutions is not that high and the image is not as sharp. But if you are just posting up the sequence up on the web, its more than enough.

Now, if you are going to shoot with a camera, there are couple of things you want to consider before you even start shooting :

Getting Started in Photoshop

Ok, now that you've got your images, its time to get down to stitching it together. I use Adobe Photoshop CS5, but you can use earlier versions too. You could also probably use other photo editing software, but the toolset might be a little different, so you'll want to play around a little. The basic idea is the same though. For the purpose of this tips, I'm just going to refer to Photoshop though since that's the most common software used.

Ok, first start out with a blank canvas. How big you need really depends on the resolution of your images. It's ok to have an excess as you will crop it down later anyway. For me, I start out with a 20,000 x 20,000 pixel canvas. Be sure that the resolution setting [Image \ Image Size \ Resolution (Pixels/Inch)] are the same for both your new canvas and the original image.

Next, I place my image, one at a time, on to my canvas, starting with the first image in the sequence. The simplest way is to just drag and drop it from Finder (Mac) or Windows Explorer (Windows). Now, if you see a big X over your image, you need to double click it to properly 'place' the image on the canvas. 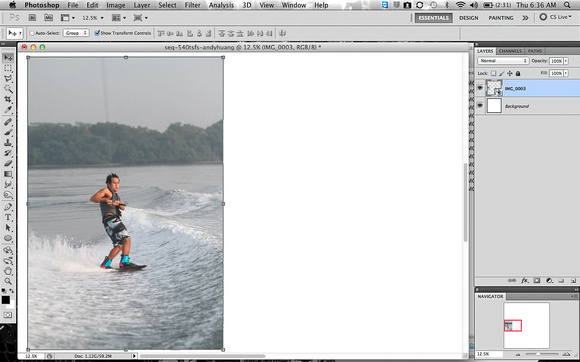 Each time you place a new image, you are creating a new 'layer'. Each layer is like its own canvas that is laid out on top of each other. You need to pull up the layers window to see all your layers. Now, when I place the next image, I turn down the Opacity to about 70% for that layer. This way, I can see a little through the top image and still see the bottom layer underneath it. 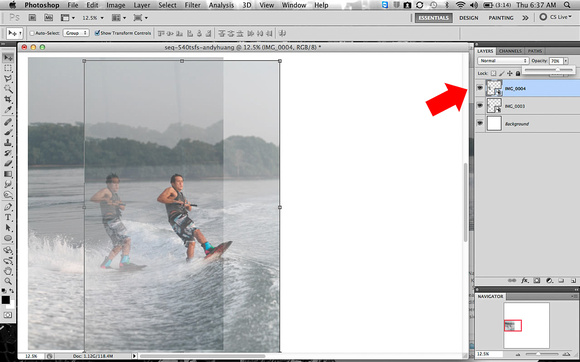 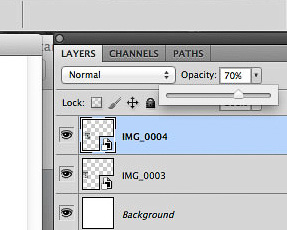 The reason why you need to make the top image translucent is because you need to line up the images so that they are in line. The best way to line them up is to match up the background. In this case, you can see that I have lined up the tree line in the background by shifting the top layer. 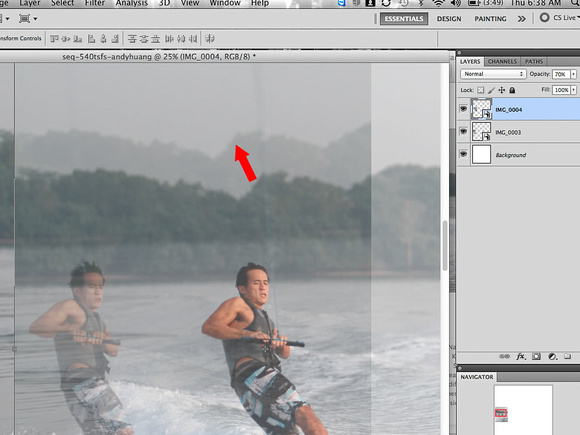 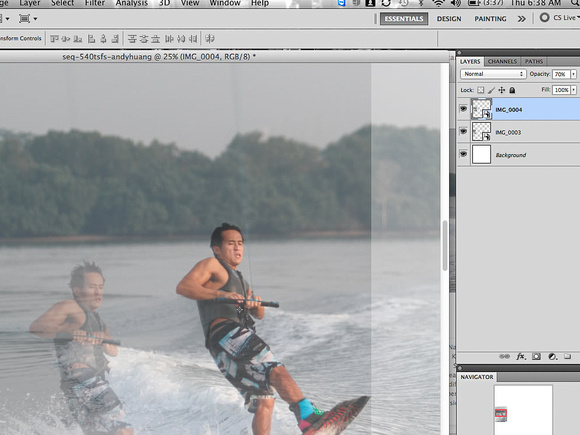 Repeat the same steps for all your images and you should end up with an image like the one below. Its also probably a good time to save you image (as a PSD file, not JPG, because you want to maintain the 'layers') if you haven't done so already. This kind of editing sucks up alot of CPU and Memory juice from your computer and its prone to crashes, so save your work often. 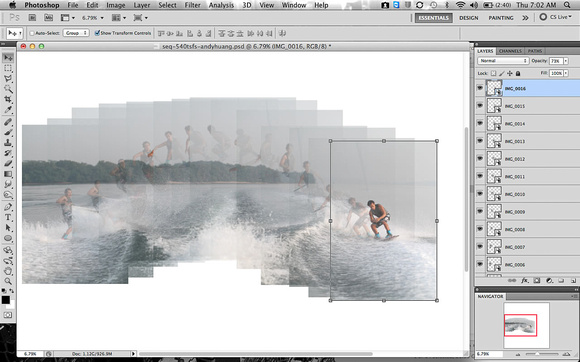 Now, if you are using a later version of Photoshop, each layer is a 'Smart Object' which we don't need it to be. So go to "Layer \ Rasterize \ All Layers" and it will make all the layers dumb (haha...) 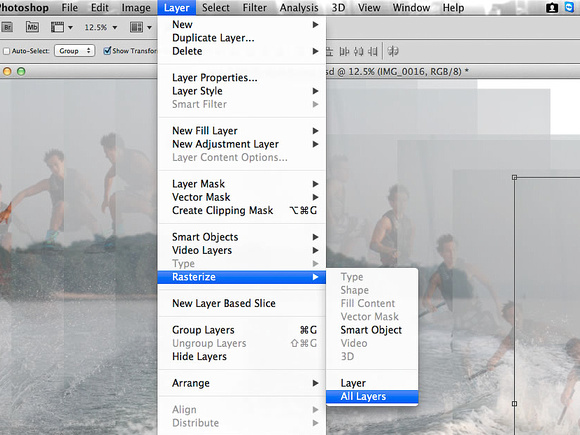 Ok, right now, since your images are overlapping each other, you need to cut out parts of the top image so that you can see your subject in the layer beneath it. You can start doing that with the erase tool, but that's a lot of work. I find it easier to cut out using the Lasso Marquee tool first and then fine tune with the Erase tool later. If it all sounds confusing just follow the steps below. You first want to select the top most layer (and then subsequently work your way down). Next, select the Polygon Lasso Tool and set the 'Feather' to be about 30 px (give or take depending on your image resolution) ... 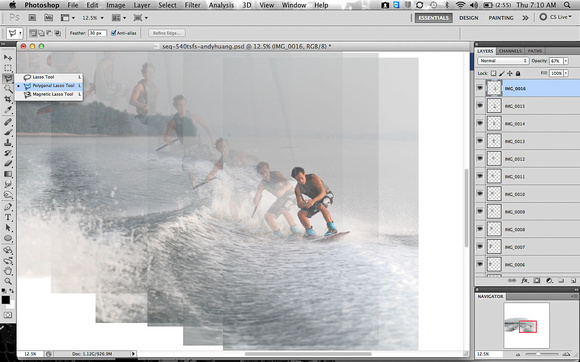 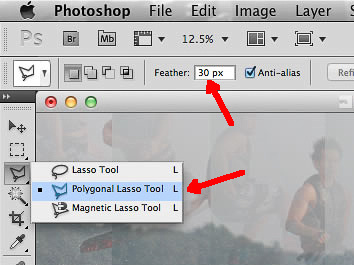 With the Lasso tool, briefly, outline the areas of the top layer you want to delete. You don't want to outline it too close to the subject because you've set the feather to be 30 pixels and it might eat into your subject (feathering makes the outline fade instead of being harsh... you'll know what I mean when you try it). Once you have set your outline, just delete it. See the before & after shots below: 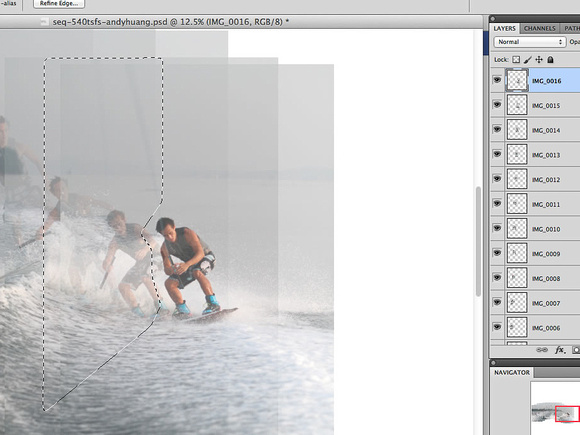 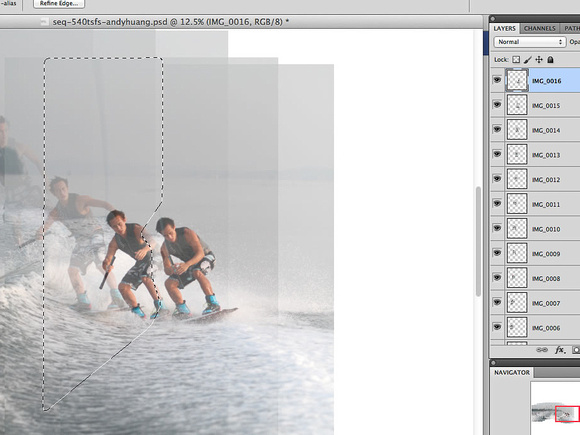 Repeat the same steps for the subsequent layers below. Once you have completed all layers, you can select all the layers from the Layers menu and increase the opacity back to 100%. Right now you should see something like this : 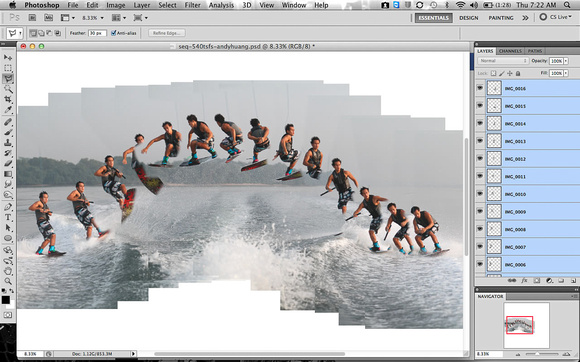 Now, if your subject (in this case, the wakeboarder) did not overlap each other at all, then most of your work would have been done by now, and you can proceed to the cropping section below. However, if your subject does overlap each other, then this would be the tricky part. This is where you will need the Erase tool. Once you have selected the Erase tool, you can select the size of the erase tool by right clicking it. You can also adjust its hardness, so whatever you erase has a softer edge to it. A quick way in Photoshop to adjust the size of the erase tool is also by pressing the "[" or "]" key. 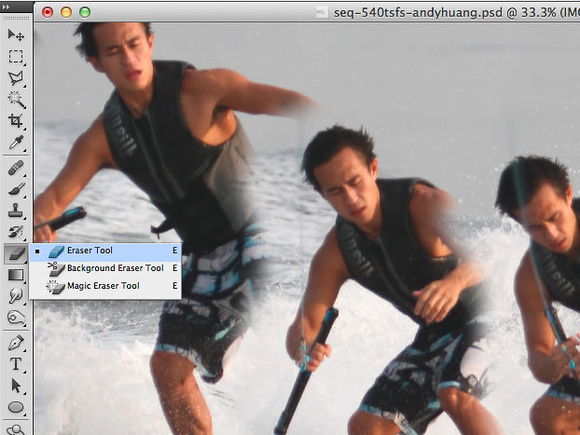 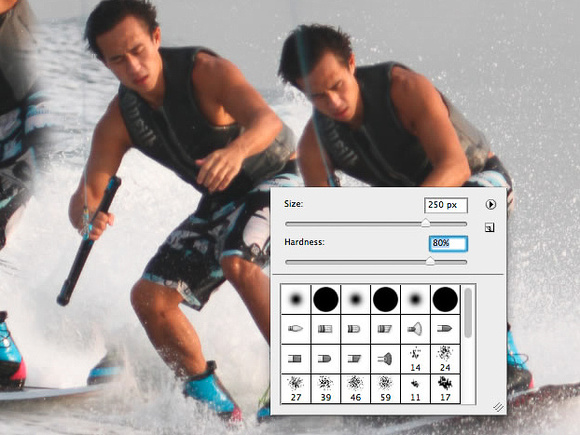 Next, you want to erase off part of the top image carefully around the subject so that you can show the subject below nicely. In the below example, I've already erased the 1st layer and now erasing the second layer, to show the 3rd layer... 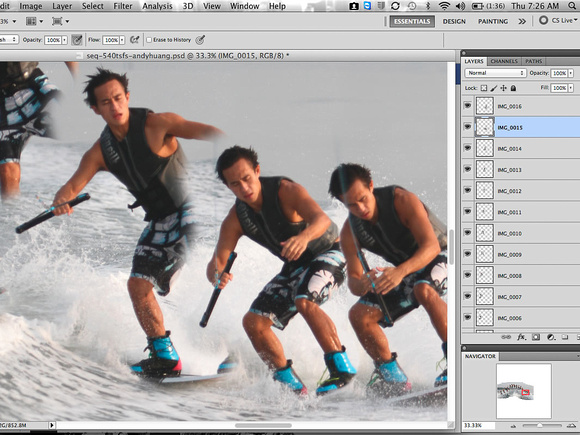 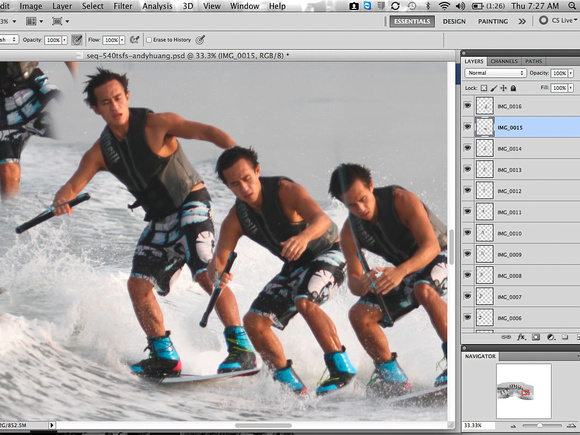 Once you have completed that, you're almost about done. Now you need to flatten all the layers into one single layer by going to "Layer \ Flatten Image". I would advise saving the PSD file first before flattening..... just in case. Once you have flattened the image, you can now 'Save As' a JPG file. If you realized you've made a boo boo in your JPG image, you can always open up the PSD file and make the corrections there. 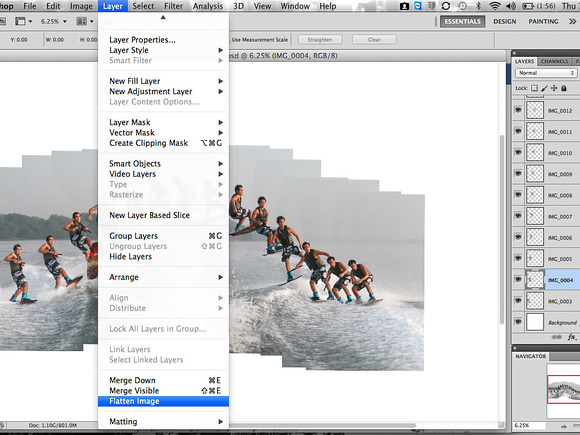 Now that its one single image, you want to crop it down to size. When you are cropping, do take note of the horizon... make sure its horizontal. If its not, the crop tool can be rotated such that the horizon can be level after cropping. 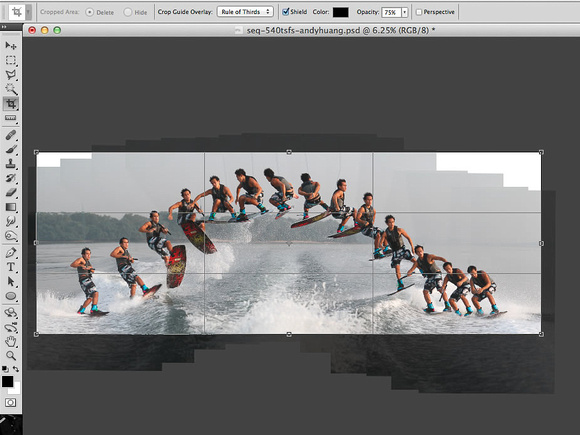 Now after cropping, you might still have some 'White' space around the corners, you can just 'clone' those areas from the area surrounding it. If you're too lazy to do that, then the next time you shoot, you can shoot a little wider. At the same time, you can use the 'Healing' brush or a soft 'Clone Stamping' tool to blend in any obvious joint lines. 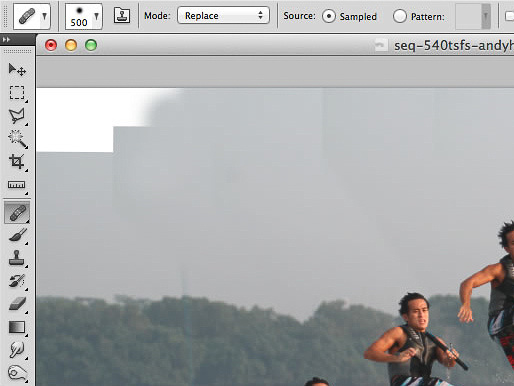 The final step is to adjust the overall image. I usually use the Tone Curve tool to adjust the brightness and contrast and then maybe I'll sharpen the image a little. That's all to it! The first time you try it, it may take you half a day to finish one sequence collage. But once you get the hang of it, you can maybe do it in 30 minutes to an hour, depending on how many frames there are and how much the subjects overlaps.

Hope you have fun with it! If you found this tip useful, do leave me a note in my Guestbook! 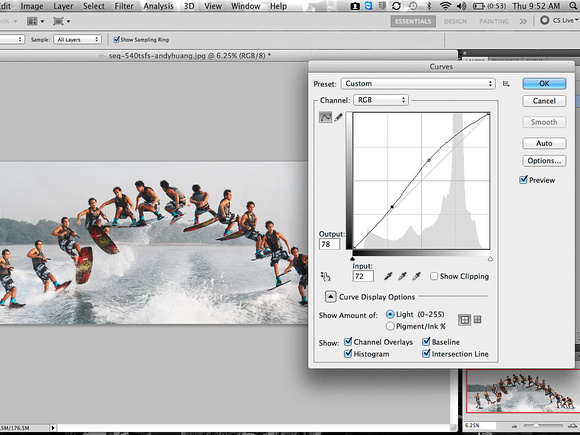 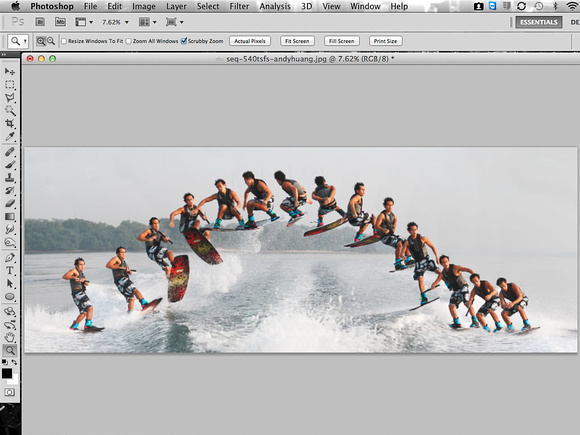